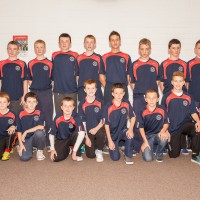 The Monageer Boolavogue U14 football team have reached the U14 County Football Final which will be played in St. Patrick’s Park on Tuesday 14th October 2014. Throw in time is 7:30pm and the team will be playing Realt Na Mara.

Please come along and show your support for this group of young lads as they try to win another piece of silverware for themselves and their club.