We will be hosting our annual field evening in the Monageer Parish Field (Beside Parish Hall) on this Sunday 5th of June, after the Patron at 6.30 pm in Monageer. There will be all the usual games/events such as bottle stalls, cake sales, golf, horseshoes, guess the weight of a lamb, hurling target shooting, and many others during the course of the evening.

We would like to invite all in the community and those who have come from further afield to come along and join in the fun, in what promises to be glorious weather conditions.

Please come along and have an enjoyable evening out in the sun. 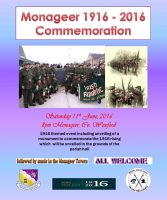 On Friday the 3rd June there is a 5km fun Run/Walk in association with the Shane Fenlon Tournament taking place from the GAA Complex in Monageer. Registration from 6.30 in the GAA Complex. Race starts and finishes at the GAA Complex. Entry €10.00 and all proceeds to Hospice Home Care. Spot prices and refreshments after race. 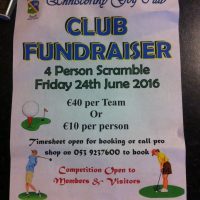 Competition open to members and visitors.

All proceeds will go toward cost of New Safety Surface on Balcony.

The second round last weekend started with the Juniors playing away to Rathnure. A game which was slow to start and where scores were hard to come by. Rathnure were hurling with a strong wind in the first half but nonetheless a good display by our backs meant they could only score 2 points in the first half, while at the other end some late points meant the half time score was 0-05 to 0-02 in our favour. The second half started disastrously for our lads conceding two quick goals, and another one a few minutes later, however we responded well and kept getting scores before we had a stroke of luck when a long range free by Peter Mernagh went just under the cross bar to record our only goal of the game. Further points from Conall Nolan, Matthew Dunne and Mick Sweeney helped us into a clear lead which we maintained for the remainder of the game. Final score Monageer Boolavogue 1-14 Rathnure St Annes 3-03.

The intermediate hurling team were in action the following day against Oylegate. Similar to the previous week we started the game well only and thanks to a well taken kicked goal by Padraig Flynn we went into a 3 point lead. Some more accurate shooting and good defending saw us take a 6 point lead at half time, 1-10 to 0-07. Similar to the previous week against Bunclody we had a poor start to the second half, and allowed Oylegate too many easy shots for points, which reduced the lead to 3 points. Scores from Shane Kehoe and Padraig Flynn helped to steady the ship but the same silly mistakes under pressure were again our undoing, and Oylegate kept taking their scores to win in the end by 0-18 to 1-13. It was certainly an improved performance from the first round game, but the same mistakes were made, which in the end cost us the two points. Unfortunately Niall O Loughlin received an injury which is likely to see him out of action for a few weeks at least, but hopefully he will be back in time to play a role in our efforts to qualify for the quarter final.

Congratulations to Frank Ennett on winning a prize in the first model county draw of this year. We would also like to thank all those who bought tickets from our sellers over the last few weeks. The funds raised will be put to good use.

Our intermediate and Junior ‘a’ hurling teams were both in action over the weekend.

The intermediates were playing Bunclody on Sunday. We started the game well with two early points but conceded an unlucky goal which was followed by a couple of quick points. We then traded points until half time, when the score was 1-07 to 0-07 to bunclody. The main damage was done early on in the second half when bunclody raced into a 1-13 to 0-09 point lead thanks to some nice point taking and some poor play from our lads. The game looked over when bunclody scored their second goal which was a rebound from a free which hit the post. 2-13 to 0-09. However in fashion similar to last years county final our lads responded well and never gave up. Two goals from substitute Cathal Walsh and a nice point left only three points between the teams with a couple of minutes to play. 2-13 to 2-10. Unfortunately we couldn’t complete the comeback, despite creating some goal scoring chances. In the very last minute we conceded a third goal to give bunclody a 6 point win…. 3-13 to 2-10. We play Oilgate next week which will be a difficult game but hopefully our lads can learn from the errors made at the weekend and come out on top in round 2. The team was: Sean Murphy, Niall O reilly, Chris Daly, Liam Gahan, Graham o Reilly, Tommy Breen, Dean Fenlon, Damien Fenlon, Laurence Murphy, Bertie Gahan, Niall O Loughlin, Brian O Loughlin, Mark Gahan, Stephen Murphy, Padraig Flynn. Subs: Shane Kehoe for Damien Fenlon, Cathal Walsh for Bertie Gahan.

The juniors played Glynn Barntown on Monday afternoon in Monageer. There was a slow start to the game with Glynn getting the upper hand thanks to a well taken goal, but we responded well with goals from James Gahan and Peter Mernagh to leave the half time score 2-03 to 1-03 in favour of Monageer. The second half started very well with a score almost immediately. We then shared points with Glynn right until the end of the game, showing great fight and determination. The Juniors play Rathnure on Friday night in Rathnure and a win here should see us a long way towards making the quarter finals. The team was; Morgan Gahan, Patrick Walsh, Liam Gahan, Ray O Brien, Sean McCabe, Paddy Breen, Paul Gahan, Mick Sweeney, Ian Hawkins, Stephen Lacey, Matthew Dunne, Sean Roche, Peter Mernagh, Adrian O Dowd, James Gahan. Subs: Declan Kelly for James Gahan.