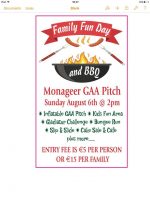 Our intermediate hurlers made it two championship wins from two games this afternoon in Monamolin. A slow start left us 3 points to 1 behind, but thanks to some excellent long range scoring from Laurence Murphy and some accurate free taking from Brian O Loughlin we led at half time by 0-08 to 0-07. Ballymurn opened the scoring in the second half before we scored 2 unanswered points. A well worked move from Ballymurn resulted in a goal to put them a point ahead, and only for some excellent goalkeeping from Sean Murphy we may have conceded another couple. Scores from Brian O Loughlin, Shane Gahan and Diarmuid Fenlon put us a point ahead and some resolute defending from all of the backs meant we held on for our second 1 point win to leave us on 4 points from two games. Next up is the Shamrocks on August 12th at 7:30 in Farmleigh.

Well done to the junior hurlers who resumed winning ways tonight in Oylegate with at 0-14 to 0-06 win over Tara Rocks. We made a lively start with James Sweeney, Cathal Walsh and Niall Finn getting points before Tara Rocks responded with 2 points of their own. We missed a number of good goal chances during the remainder of the half and struggled to score until James Gahan popped up with our 4th point of the half. We conceded the last score to leave the half time score at 0-04 to 0-03.
We started the second half more accurately with scores from Shane Kehoe, James Gahan and a wonderful sideline cut from Sean McCabe. Still we wasted a number of goal chances but Matthew Dunne won a number of frees which he scored himself to leave a 7 point gap between the teams. Further scores from James Gahan and James Sweeney meant that we opened up a 9 point lead before Tara Rocks scored their 6th point with the last puck of the game. To concede only 6 points in a championship game is testament to the excellent defending on the day in particular from the more inexperienced pair of Lee McHale and James Breen. This win leaves us with 2 wins from 3 games with Horeswood and Bannow still to play.
Team: Morgan Gahan, Paddy Walsh, Ray O Brien, James Breen, Lee McHale, Paddy Breen, Robbie Donnelly, Shane Kehoe, Stephen Lacey, Adrian O Dowd, Matthew Dunne, Cathal Walsh, James Gahan, Niall Finn, James Sweeney. Subs: Colm McGannon for Adrian O Dowd, Sean McCabe for Niall Finn, Niall Finn for Cathal Walsh.
Scores: Matthew Dunne 0-05 (0-4 frees), James Gahan 0-03, James Gahan 0-02, Sean McCabe 0-01 line ball, Niall Finn 0-01 free, Shane Kehoe 0-01, Cathal Walsh 0-01.

Freshly promoted from the Junior B grade for 2017 our junior A footballers played their second championship game tonight in monageer. Due to a wedding, lads injured, lads working and other activities we were short 10 players on the team that drew with ballyhogue in the previous round. In fact none of the 6 forwards who started that day were available tonight. Despite this we managed to get a panel of 17 players together. A slow start left us two points behind until Paudi Cooney opened the scoring with a well taken point. Soon afterwards Sean McCabe scored a wonderful goal with a ground kick that Lionel Messi would be proud of straight into the top corner of the marshalstown net from over 20 yards out. Unfortunately this was as good as it got for our lads as marshalstown took control with a goal of their own along with a number of well taken points to leave the half time score 1-10 to 1-03. The second half started In a similar fashion with marshalstown on top but our defence put in some great defending to keep the scores down. Towards the last ten mins our lads began to get on top with Sean McCabe, Barry Murphy and Ray o Brien taking some lovely scores to leave the final score 1-15 to 1-08 to Marshalstown. Despite being well behind, our lads battled until the very end of the game fighting for every ball. Team: Colin Hawkins, Lee McHale, James Donohoe, Adrian O Loughlin, James Breen, Ray O Brien, Ciaran Rochford, Sean McCabe, Peter Mernagh, Denis Walsh, John Murphy, Paudi Cooney, Daire Walsh, Barry Murphy, Adam Dunne. Sub’s: Pa Walsh for Daire Walsh, Laurence Murphy for Adam Dunne, Daire Walsh for Paudi Cooney.