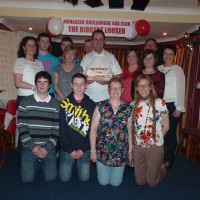 Last year we held a competition The Biggest Loser – it involved ten leaders, with teams behind them. The aim was to lose weight, get fit and have fun and make a few bob for the Club. All four were achieved with Donny Walsh being the most successful person.

This year we are running the Biggest Loser again but this time we are hoping to get a team from each Townsland in Monageer and Boolavogue. Each team will be put on the scales at the one time therefore all of the team will be involved in losing weight. The first weigh in will be on the 10th January at 8pm in the GAA Complex, You will then have 3 weeks before the first event i.e. the cross country on the 2nd February at 2pm which is compulsory for half the team. Then 2 weeks later we will have the cycle which is on the 16th February at 2pm and is compulsory for half the team. On Sunday the 2nd March at 2pm we will have a road race/walk which is compulsory for all team members. This walk will start at the GAA Complex, proceed through the village of Monageer, down the New Line through Oulartard, Tinnacross and finish in the Harrow. Sponsorship cards will be given to each competitor and collected on Friday March the 7th at 7pm in the Complex. The Final weigh-in and results will be done on Saturday March 8th at 9pm in the Monageer Tavern.

Everyone else who finishes 2 points

If a person over 40/50 finishes before an over 30, they do not get both sets of points, they get the points for their own category.

Photos from last years events can be viewed in the gallery.